How (and why) I Learned to Fly a Helicopter

I learned how to fly a Bell 407 helicopter in X-Plane. The Bell 407 model from Dreamfoil Creations is widely acclaimed as possibly being the single most realistic helicopter add-on in X-plane according to real Bell 407 pilots. So, how did I get here? What possibly lead me on this journey? Music is a major pastime, as well as creating digital art and dabbling in laser entertainment, but flying – and specifically flying a helicopter was not on my radar. I did grow up in a family where my dad was a Navy pilot, where we built flying model airplanes, and even my mom tried her hand at flying and flew solo just to prove she could do it. So flying was more or less part of my family heritage.

My story: It all started with Google Earth when they first introduced their Flight Simulator, giving one the ability to fly around their maps. At the time, my computer was not powerful enough to handle the extra processing required. Years later, when I finally upgraded to a more powerful computer, I tried flying again in Google Earth. It was fun, but trying to control an airplane with a mouse and keyboard proved daunting. So that led to my purchasing a joystick. Then after a while, I started to wonder if there was a better flight simulator available that had more realistic scenery and buildings than Google Earth had to offer. That's when I discovered X-Plane. 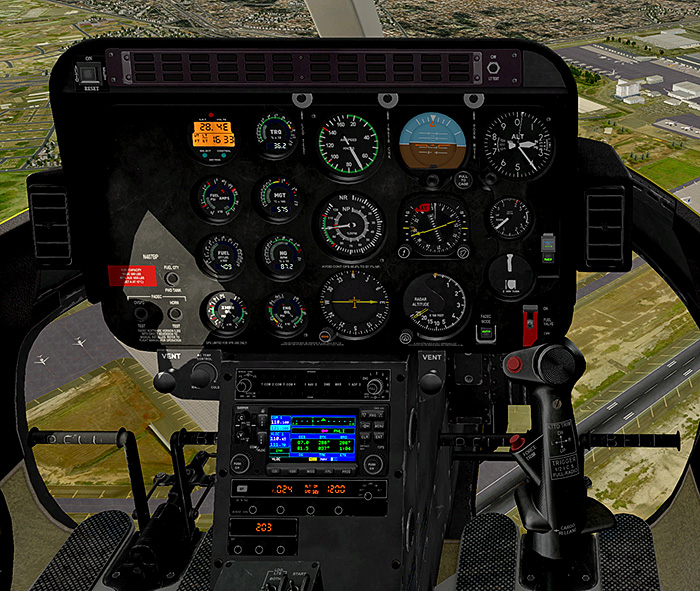 X-Plane is not so much a game as it is a realistic flight simulator. The professional version is used by NASA, Boeing, FAA, Piper, Cessna, Scaled Composites, and others. Indeed, some actual aircraft models are designed and tested in X-Plane's Plane-Maker app before making the real deal. This is possible because X-Plane from Laminar Research uses blade element theory, which involves breaking the aircraft down into many smaller elements, then calculating the forces on each element many times per second. Everything is then integrated into velocities and positions resulting in a realistic flight model.

Real pilots use both the home and professional versions of X-Plane to stay sharp and hone their flying skills. One can even go so far as to sign up for the PilotEdge service where real Air Traffic Control personnel communicate with X-Plane pilots in controlled air space.  I have not gotten that deep into the experience. I'm just thrilled to be able to operate and fly a helicopter.

There is a multitude of different aircraft types included in X-Plane that you can learn to fly, including manufacturers such as Cessna, Beechcraft, Cirrus, Stinson, Piaggo, Boeing 747, even the Space Shuttle orbiter, the Lockheed SR-71 Blackbird, or NASA's famed X-15. I tried a lot of them and they are thrilling. But then I tried my hand at helicopters and quickly faced great difficulty! Flying a helicopter is a lot like trying to balance on a very large beach ball. Once you develop that skill, it's like riding a bicycle and something that becomes instinctive. In the process of learning, I soon discovered I needed a better joystick. Either one spends a lot of money to purchase a full-size USB helicopter collective and cyclic or find a joystick with Hall Effect sensors for incredible accuracy – something you dearly need when controlling the cyclic to maintain pitch & roll stability. I opted for the latter with a Saitek X-55 H.O.T.A.S. (Hands on Throttle and Stick) and the lightest spring tension. Some people remove the spring entirely for a totally floppy cyclic, like the real deal.

After learning how to start up the helicopter, the biggest task was learning how to balance this very massive beach ball! Probably the hardest thing (still) is landing on an exact, tiny spot, like a wooden trailer, because it is difficult to see all around and down in a flight simulator. Having wrap-around screens would help, and perhaps the Oculus Rift 3D visor which X-plane supports, but for now, there is a bit of a blind spot trying to gauge what is immediately beneath the helicopter when trying to hit a tiny target zone. I'm able to land pretty well on helicopter pads, which are larger than a little wooden trailer. Even then, depending on fluctuating skill, sometimes I am not the best at landing precisely. This is where a real, longer cyclic stick would help simulate the real thing and give even finer, more nuanced control over the pitch and roll.  Perhaps the next logical step would be to get Komodo Simulations B407 Pro Cyclic for $337 and $366 for the Pro Cyclic Base Unit (encoder and USB). And if I get that addicted to flying helicopters properly, it's time for either a wrap-around multi-screen display or VR goggles! But I digress. For now, the Hall Effect sensors in my joystick work pretty well.

Mostly, I only fly the Bell 407 helicopter. Why helicopters? Well, the challenge of balancing and learning how to do it was a real draw. It's very addictive once you learn how, and quite a joy to fly. Secondly, some of the airports in X-Plane are so rich with details that I like to fly slowly and hover around to explore the airports. There's also a sense of freedom in being able to hover and land anywhere you want, not just on runways. The helicopter tops out at 140 knots, slower than even private aircraft, but it's still a thrill ride.

Another thing that happened to me was discovering PHNL Honolulu International Airport. The free version I installed from author Haui includes rich orthophotography and beautiful aqua-colored ocean shallows. It's so gorgeous and fun to fly around in a helicopter that I almost always fly there!  A few other X-plane add-ons round out the experience for me:

Once you design or download gate traffic patterns, the airport becomes populated with moving ground traffic to/from the gates, as well as plane landings/departures filling the skies, which makes the whole X-plane experience realistic and enjoyable. Another add-on I enjoy is X-Camera which provides unlimited view options within the cockpit and externally, such as aircraft walkarounds, camera orbits around the aircraft during flight, airport cameras, free cameras, target following cameras, etc.

With these few add-ons, it elevates X-plane into an immersive and believable experience. X-plane uses OpenStreet Maps to display proper roads and simulates terrain with an auto scenery generator, although airports can be custom designed. There's a lot of free and payware airports and scenery add-ons available, so you can tailor your favorite terrain.

If you've ever wondered about flying, I highly recommend X-Plane. It's inexpensive and the closest thing to real flight! I find myself flying at least once a week or more, just for the thrill of it!