I started out in music by singing quite well at age 5, then stopped abruptly when I was laughed at in Kindergarten. In high school, I was toying with a cheap nylon string guitar that only had two strings on it. I probably discovered every chord and sound combination possible! While in college, I got a part-time job working inside Audiotek Recording Studios (ASI) at 711 W. Broadway, Minneapolis, MN winding magnetic tape into cassettes for MetaCom, Inc. Later, I operated their Telex duplicators and did tape editing of vocal recording masters. MetaCom, Inc. later opened their own storefront next to the studio, and years later, they were sued for offering rapid cassette duplication services. They survived and grew into a large media company.

I bought my first steel-string acoustic guitar: an Ovation Balladeer. It featured a radically rounded back that was molded from the same synthetic material used in helicopter blades from Kaman Corp., making it the loudest un-amplified acoustic guitar ever produced. I couldn't read or write music, but I developed a play-by-ear relationship that continues to this day. I remember that I chose to starve for two weeks in order to purchase that Ovation! That kind of passion was typical as I began to amass more musical gear and slowly build up my home studio.

As a child, I often took things apart to see how they worked; sometimes getting electrical shocks in the process! I actually heard 60 Hertz alternating current in my head – ouch! Radios, phonograph players, toys, doorknobs - everything was fair game for my curiosity. I would analyze the look of things and began drawing realistic trains, perspective views, tree branches, and dinosaurs by age 5. That same visual acuity led to my musical and aural explorations.

After seeing the European rock band Nektar perform on tour in Minneapolis, I just had to have an electric guitar and make that sound, especially sustained notes. So, I sauntered up to B-Sharp Music in Minneapolis and bought a legendary Jimi Hendrix-style Fender Stratocaster (white body/maple neck) and Fender Twin Reverb amplifier, all for the incredibly low price of $600! I remember Trini Lopez, the owner exclaiming Let me get this straight: you want me to sell you this custom guitar and this amplifier for only $600? is this really all the money you have? When I sheepishly replied yes, he said to come back with another $50 for the guitar case, and he would let everything go for that price. I was elated and I was now "electric"! This new interest quickly escalated into frequent trips (down the street) to Knut-Koupee Music in South Minneapolis to buy supporting effects such as distortion, phaser, delay, wah-wah pedal, strings, picks, cables, magazines, etc. It was like some newly discovered culture to explore endlessly on weekends. Yup, I was hooked big time!

My early recordings were live jams to my rhythm recordings on 1/4" reel-to-reel, and later, the left and right channel splits into a cassette deck. My song Inner Notes on Dreaming With Open Eyes (below) was recorded in this manner. (I heard Dave Grohl exclaim that he did the same thing when starting out!) No multitrack recording for me – that remained the exclusive domain of professional recording studios.


"Notes From Within" by Wendy Dunham

However, something happened that changed my music world: I bought an Atari ST computer to do digital artwork. Then one night I saw a Computer Chronicles show entitled "MIDI Music" about using a software program that emulated a multitrack recording studio. By recording notes from different instrument sounds with a MIDI keyboard, it allowed you to play all those separately recorded tracks back at once. When I heard that, a little "light bulb" went on over my head, and I curiously looked at the back of my computer: there I discovered two weird-looking plugs – I did, indeed, have this new MIDI capability! So off I went to buy a Casio CZ-101, two MIDI cables, and a little MIDI recording software package called EZ Tracks from Hybrid Arts. That same night, I was making rudimentary multitrack music! Soon after, I purchased Steinberg Pro-24 III, the forerunner of Cubase 1.0. 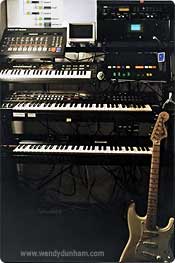 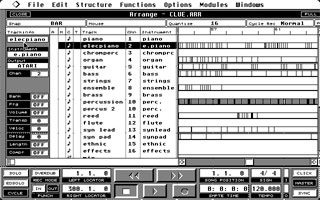 Over time, this MIDI studio began to grow into a monster (left), as is often the case with all so-called "hobbies". It ultimately scaled to include over $15,000 worth of gear including loads of synthesizers, drum machines, digital samplers, F/X modules, cables, digital and analog support devices, a multi-channel MIDI expander, a Synapse MIDI router, a MIDI-controlled audio mixer, and a large A-frame rack to hold it all. I also moved up to Steinberg's Cubase recording software (for which I quickly became a beta tester) and Steinberg's MIDI Studio Manager. Later, I purchased DECK digital recording software to add live guitar to the MIDI recordings. (DECK was created by people who felt Pro Tools was too expensive for the average musician). The mix was recorded to a special Denon cassette deck capable of recording up to 18 kHz.  It was a very complex system but worked well and allowed me to create professional-quality music.

Synapse MIDI Router used in my old studio. (I'm glad I no longer require expensive stuff like this!)

I had my first 15 minutes of fame when The Garden Path At Twilight (below) from my album Dreaming With Open Eyes received national airplay. That album was added to Apple Music. Due to some extenuating circumstances, I had to disband my MIDI studio. I kept my trusty Fender Stratocaster.


"The Garden Path at Twilight" by Wendy Dunham 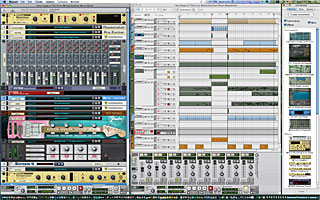 Later, something radical began happening to music creation: software and computers progressed to the point where they were capable of total synthesis. In other words, you no longer needed tons of hardware, synthesizers, and F/X boxes connected to a computer – the software had become both the recording studio and all the musical devices, keyboards, and modules! That software is called Reason Suite from Propellerhead Software (the company later renamed Reason Studios in 2019). Other than a single MIDI keyboard for input, everything else resides inside the software as virtual instruments, F/X, and master class mixing hardware! Live instruments can be added, either by imported previous recordings into its virtual samplers or by recording live direct to track.

Believe me, this technology seriously competes with recording studios. Indeed, most of the big studios have gone away due to the digital revolution. Some professional musicians are even ditching their old hardware-based studios and switching to Reason to create polished recordings. Music authored with Reason Suite appears regularly on the television series CSI, movie soundtracks, and various artist albums. My album The Magic of Hyacinth was produced entirely with Reason, as has every song and album since then. 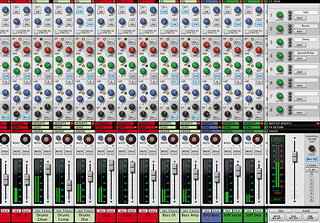 On 9-9-09, Propellerhead Software (now named Reason Studios) released a new companion to Reason called Record, which finally brought digital recording and DAW capability to Reason's MIDI. Record and all its audio recording features were later combined into the new Reason 6 and will no longer be a separate program! Now you can have the best of both worlds: superb MIDI software and digital recording capabilities, all in the same interface. Not only are digital and MIDI integrated seamlessly in the same app via Propellerhead's elegant approach, but you also get an amazing mixing console modeled after the legendary SSL 9000k analog mixing desk. Forget the expense, learning curve, and power-hungry plug-in architecture of Pro Tools – Reason is an easy-to-use "pro" solution for digital and MIDI recording that doesn't break your piggy bank! If you think Pro Tools is the only valid way to go, you may not have given Reason a spin! 😃

Later, Reason Studios relented and allowed VST plug-in integration into Reason! Additionally, they also allow Reason Suite itself to be loaded as a VST plug-in in other DAWs, like Logic, Pro Tools, etc.

Reason Studios has added some great new, must-have features, including Parallel Channels, Group Channels, Spectrum Analyzer (with EQ controls that directly change the SSL EQ knobs), and audio quantize & slicing using their industry-best time stretch. And for those who have external MIDI instruments or softsynths, the External MIDI Instruments rack device now connects them to Reason. Reason Suite is an all-in-one solution for music creation, mixing, and in some cases, mastering. I personally master all my songs together in iZotope's Ozone standalone program, as a means of balancing the dynamics and frequencies for more a cohesive album sound.